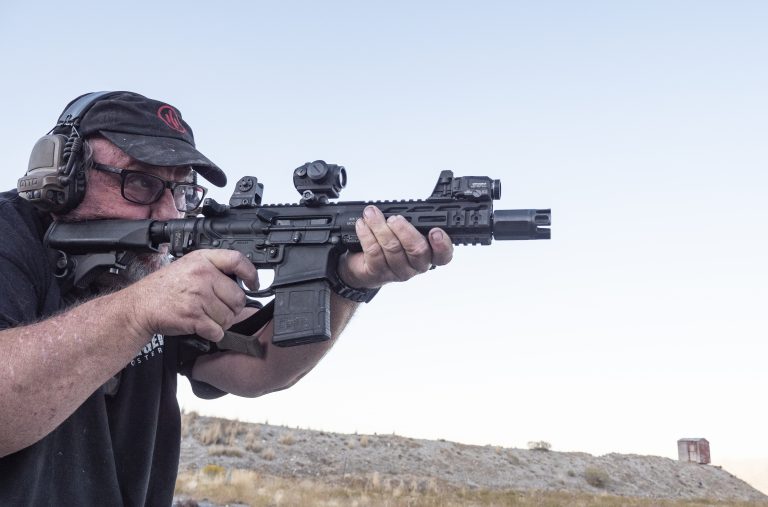 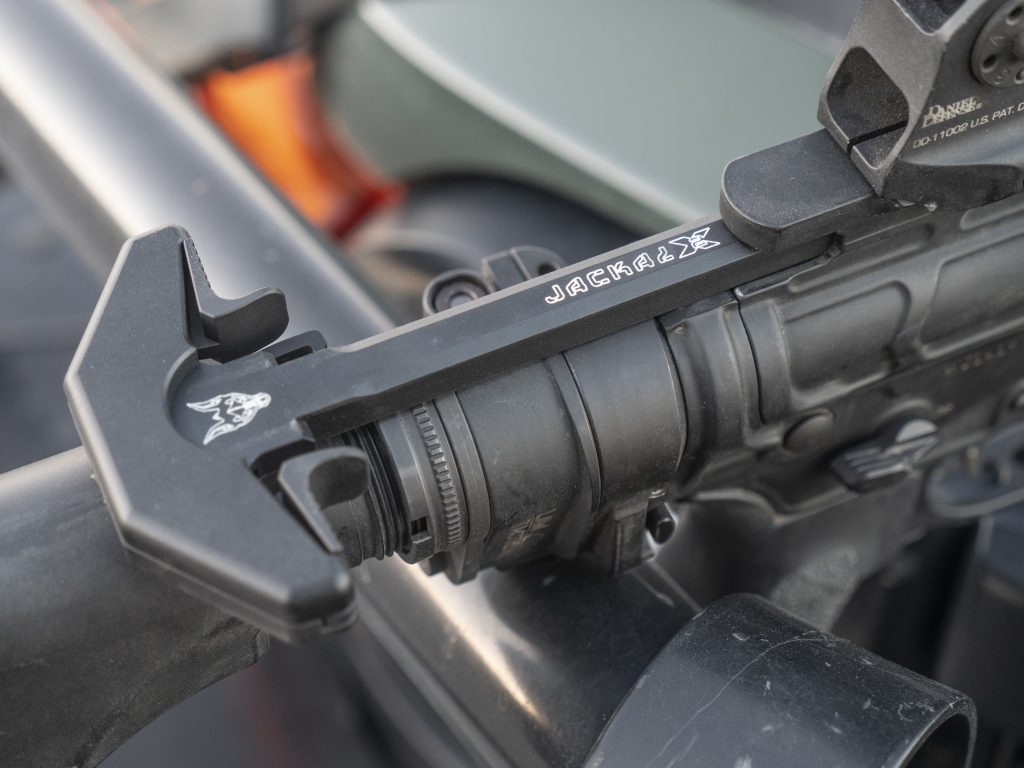 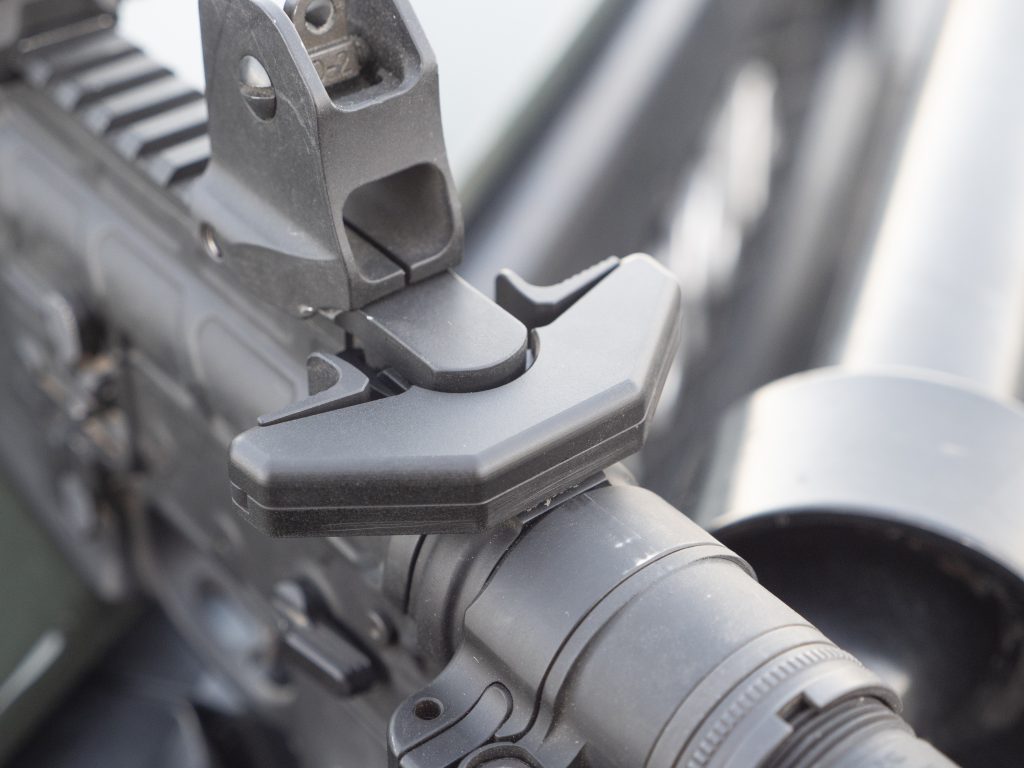 The solid construction of the Jackal was designed to endure combat operations. 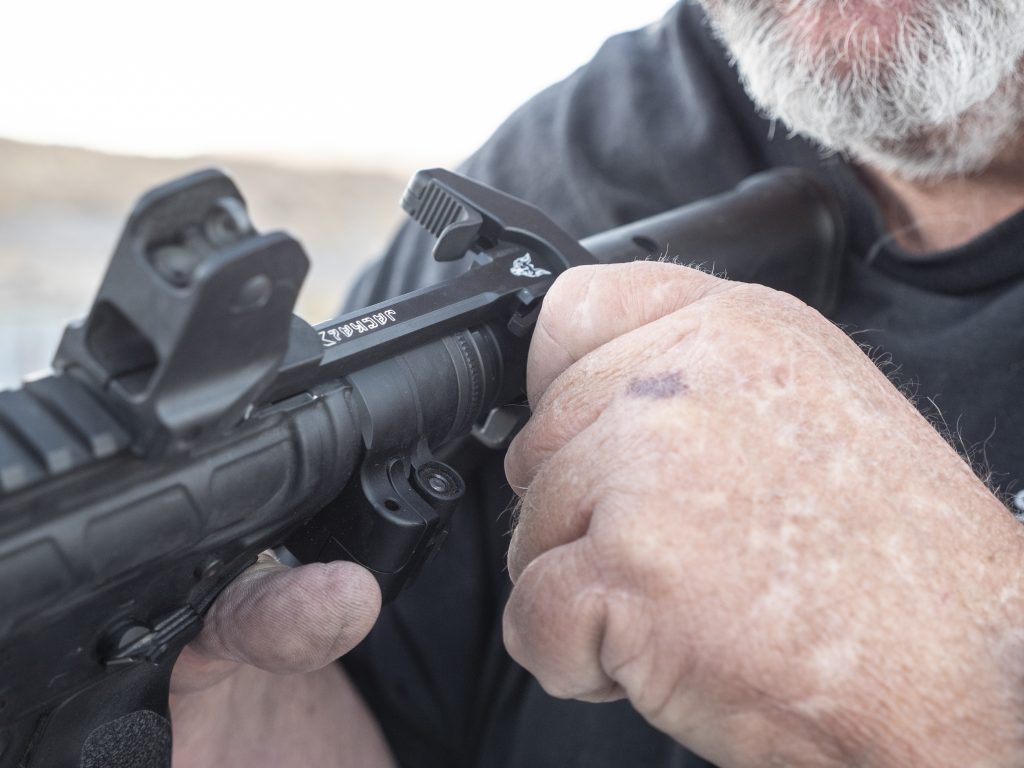 Easy and smooth operation without lateral or binding forces.

The Jackals laterally inverted levers are virtually impossible to snag. 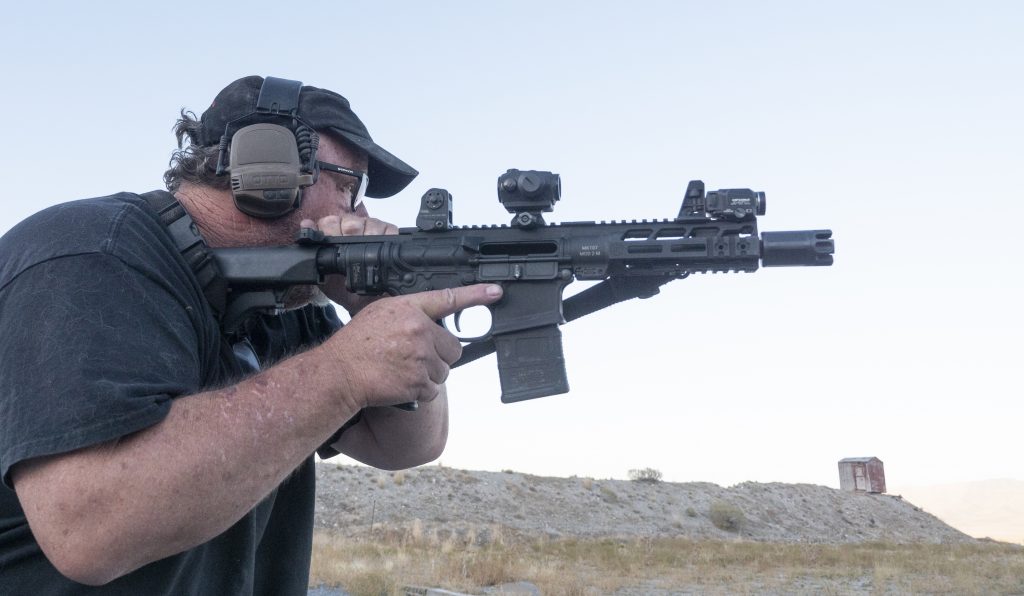 Doesn’t snag, but runs when you need to run it, there is no problem using your fingers, palm, gloves or bare hands. Left, right one hand, or two…

My relationship the last two decades with the AR platform as an entry weapon can be characterized as somewhere between reluctant tolerance and absolute disdain.  Moving from my HK MP5 and HK53 was done by necessity, not choice.   As the agency moved to the AR it just seemed counterproductive for the firearms instructor to run something different.  While my HK53 was no tack driving machine it was an excellent entry gun, it worked, no matter what, in any condition, dirty, wet, hot, did not matter. Loud, yes, but so was everything else in 5.56mm with a short barrel.  Best of all, no charging handle to snag on my gear rendering my live saving tool useless. Early AR’s and M16’s had other issues but this was easily the most annoying. There is just something wrong about adding a protocol to make sure your rifle has not come out of battery before exiting the vehicle, entering a target, or working a tight corner while inside.  It was also the most cumbersome and painful means of fixing the inevitable stoppages your AR will suffer.  It seemed a simple fix, it just took over 20 years to find it.

To be fair most of the issues suffered by early AR’s has been addressed, they are more reliable, accurate, and user friendly in general.  Even short barrels work, the Primary Weapons MK107 used for testing is one of the most reliable  ever used.  Unfortunately media and the industry culture drove changes to the charging handle with about zero attention to close quarters use in full kit.   Early versions were small, hard to reach (unless it was your kit) and painful to run. Most solutions made them bigger and less sharp, just longer and more snag prone, not less. Everything levered outward, the perfect condition for snagging them on gear and taking your rifle out of battery.   All that changed was the length, shape, and “cool factor” of the levers.  Great for photos or catalogs and it made it easy to fix your rifle when it failed. It was all about using the charging handle, something you should only be doing twice, when you charge your rifle and unloading.  Changes were geared towards fixing a rifle that did not work.  For those using AR’s that ran properly they were more liability than asset. Innovation driven by social media and propaganda, at least until now.  A new company has decided to innovate based on application.  X2Devgroup listens to professionals taking the AR into harm’s way, not the photo studio, and their Jackal charging handle is a perfect example of that mindset.

Rather than just make cosmetic changes Ernie at X2DevGroup decided to go a completely different direction.  Levers on the Jackal pivot inwards, not out, you can still hook them on things but your rifle stays in battery. One lever does not operate the other, they each operate the release so if one breaks for some reason the other works just fine.  Every design change is about fixing the inherent issues with current designs and works with any AR that does not require proprietary parts. All the sharp edges are remove making it easier on your hands, and since pressure is inward you are less likely to bend them under very hard use. Everything designed into this started with direct input from professionals using them in the field, law enforcement and military throughout the world.  It is a smart design and it works.

My primary test platform was a Primary Weapons MK107 chambered in 5.56mm, my favorite short rifle for defense and one used for entry years ago.  Light, compact and reliable it is perfect for CQB work. Over a couple months hundreds of stoppage drills along with regular loading and unloading were performed, much of it in full kit.  I tried snagging it on walls, benches, the ground, parts of the truck as well as gear, it just does not happen under anything but the most direct attempts.  Running your rifle as if you would in the real world makes it all but impossible.   I even smacked it on a range shooting platform a few times and it took chunks out of the platform while remaining in battery.  In and out of the bag, the truck, pack, it was always ready to go.  At the same time, when you need to run it there is no problem using your finger, palm, gloves or bare hands.  Left, right, one hand, two, even mortaring on stuck cases it always released when needed without bending the shaft or damaging the levers.   As a bonus, with the forces more centered it takes less effort to operate it, a win all the way around.

Tray hard enough and you can break anything, but under the harshest conditions you would run your AR the Jackal performed as designed.  It worked for me on piston, DI, long barrel, short, any conventional AR15 or AR10. Hybrid or proprietary systems may pose a problem, but  every AR tested that accepts aftermarket charging handles worked.

Is this a must for everyone, of course not, depends on what you do. Shooting from a bench pretty much anything works. If it’s all about looks there are plenty of alternatives.  If you will never snag your charging handle or seldom use your AR no worries.  But, if you are working in and out of cars, performing entry, operating in tight spaces or jumping out of perfectly good aircraft it is a must try that will end up a must have.

I have always considered the charging handle on the AR the least well thought out part on the rifle, maybe short of the forward assist.  The Jackal has changed that for me, it seems to do exactly what it needs while eliminating the limitations of old.  If you have and AR, especially if you perform entry or work inside tight spaces for defense or executive protection you owe it to yourself to give this a try.  It may be the best hundred bucks you have ever spent on your AR.