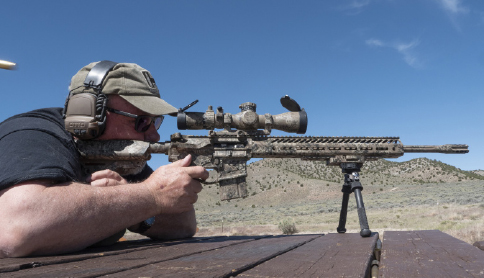 The VF18s vent-forward flow dynamics is ideal when shooting out of vehicles or in tight spaces. 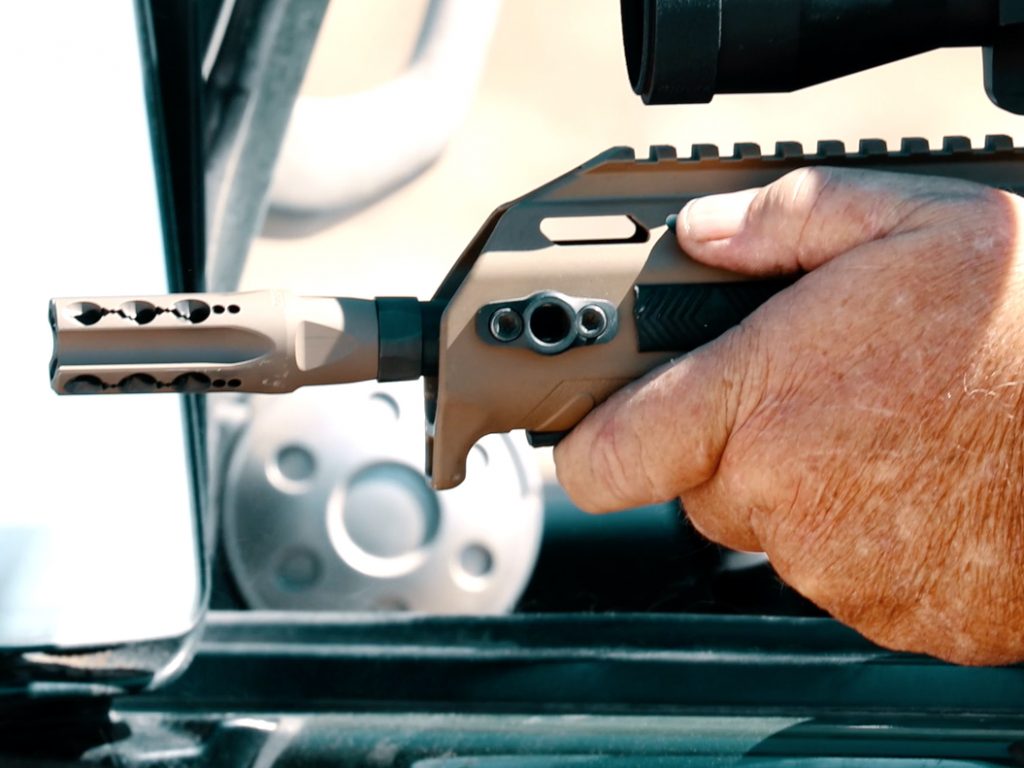 Used from a vehicle it does not take off the paint or take out the mirror like many muzzle brakes will.

Used on typical entry carbines, or duty rifles, the VF18 significantly reduces blast at the shooter and anyone next to them.

For over a decade I have tried to get the muzzle device industry to produce something that diverted muzzle blast away from the shooter and those next to them without producing a ball of fire and a debris field. Recoil mitigation would be a bonus. I just did not want it pushing up or down on my muzzle. Not looking to win competitions, just fights. So, if my muzzle stays put, I am happy. Everyone told me that was just flat-out impossible, no interest, just for cops, and too costly.

Ernie, CEO of X2 Development Group (X2 DevGroup), on the other hand, took that as a challenge, and while it took years in development he has come through. Used on typical entry carbines, or duty rifles, the VF18 significantly reduces blast at the shooter and anyone next to them, which is essential for entry work. Flash mitigation is roughly the same as an A2 flashider. Recoil mitigation is noticeable.  Depending on the rifle’s gas system, ammunition, and how well the rifle is tuned, it can be substantial.  Your rifle remains controllable without a fireball, and no concussive effect as a shooter, or the teammates next to them.

I have been testing these since the prototype stage and the latest version is excellent.  Used on ARs with barrels ten inches and longer it’s about perfect.  Loud, as all of these are, but there is no noticeable blast as a shooter, someone in the stack, behind the same cover, or on a line. Shorter barrels are louder, more flash, but you expect that on a barrel six inches closer to your face. Nothing to push your muzzle up, down, or sideways, it stays where you point it (as it should).

Flash is the same as an A2 bird cage or equivalent, better on some rifles. Dust signature and debris in prone is less, making it easier to stay on target under dusty conditions. Used from a vehicle it does not take off the paint or take out the mirror like many muzzle brakes will. No debris in your face when next to a wall, on a barricade, or in close proximity to other cover. It does not make your rifle quieter but sending it forward makes it much easier on your ears in a fight where you have no hearing protection.  Perfect, of course not, but nothing it does makes it harder to fight with your rifle. In fact, just the opposite. Everything the VF18 does keeps you in the fight no matter how close.

Is this for everyone or every application, probably not.  If you struggle controlling the massive recoil of a 5.56mm then get a brake or a gym membership. If your .308 is too hard to shoot, same thing, or move to a 5.56mm. Everything is a tradeoff. Concussion and loss of hearing for faster split times is a shooter’s choice, just not mine. Compete or only shoot with hearing protection or double up. It really does not matter. It does not stop the effects on your brain, you just can’t hear it when it happens.

Suppressors are great, but most agencies can’t afford them, won’t buy them, and in many cases, it turns your rifle into a gunked up tool for stoppage drills.  There are tons of choices out there, but none so far has done a better job when it comes to self-defense, duty, or especially entry use.  If you are going to fight with your rifle you owe it to yourself to give one of these a try. You’ll appreciate it along with anyone next to you!